Ah, the good old sugar versus fat argument. For years, there has been massive speculation about which type of diet has a higher effect on obesity, and whether sugar or fat is worse for the body. There are pretty serious groups defending either side, too; some will argue that fat is the cause, whereas others will point the finger at sugar. I’m not really one to get involved with heated arguments like these, but for the sake of helping others I wanted to put an end to this age-old debacle. The only thing to turn to in this situation is science. In this article, I’m going to break down each nutrient and explain the differences between each, and in the end we’re going to have our absolute answer on which diet is truly worse than the other.

Just a forewarning: highly technical brain-numbing science talk is about to begin. Feel free to skip to the conclusion if you’d like.

The Real Definition Of Obesity

Obesity is the nutritional classification a person falls into if he or she is very overweight and has a high percentage of body fat. Objectively speaking, an obese person is one that has a Body Mass Index of greater than or equal to 30. In the United States, 34.9% of the adult population is diagnosed as obese according to 2013 National Nutrition Survey conducted by the Food and Nutrition Research Institute. The high percentage is mainly due to the availability of high-calorie food, excessive portion sizes, prominence of unhealthy convenience foods, physical inactivity, and the fact that junk food and fast food are cheaper than natural and healthy foods. In other words, there are 50 McDonalds stores to every 1 Natural Cafe (a popular healthy food chain in California).

Obesity is basically caused by a lifestyle and diet consisting of a large intake of food with little exercise, and in some cases, it can also be caused by metabolic and genetic contributions. Being obese means that you are more susceptible to diseases and illnesses such as hypertension, type 2 diabetes mellitus, gallbladder disease, sleep apnea, stroke, etc. and you are more at risk to breast, prostate, and colon cancer. Consequently, obesity can be fatal, and is one of the main causes of preventable deaths in the world. Along with these ailments, obesity can also decrease the quality of life because being heavier than most provides difficulty in physical activity and basic tasks, as well as several potentially harmful psychological effects.

Comparing Sugar And Fat At A Raw Level

It has been stated that high-calorie foods and little physical activity to burn them off cause obesity, but which diet causes obesity the most; a sugar-rich diet or a fat-rich diet?

Sugar is high in foods such as desserts, soft drinks, and candy. Sugar is the common term for sucrose, which is a disaccharide that is converted into glucose upon digestion. Glucose, or blood sugar, is the simplest form of carbohydrates, and is stored in the body as glycogen, which is broken down back into glucose when energy needs arise. Glycolysis is the term used when glucose is converted into usable energy or ATP, which can be utilized by the body to maintain normal body processes. Below is a diagram showing the digestion of sugar in the body. 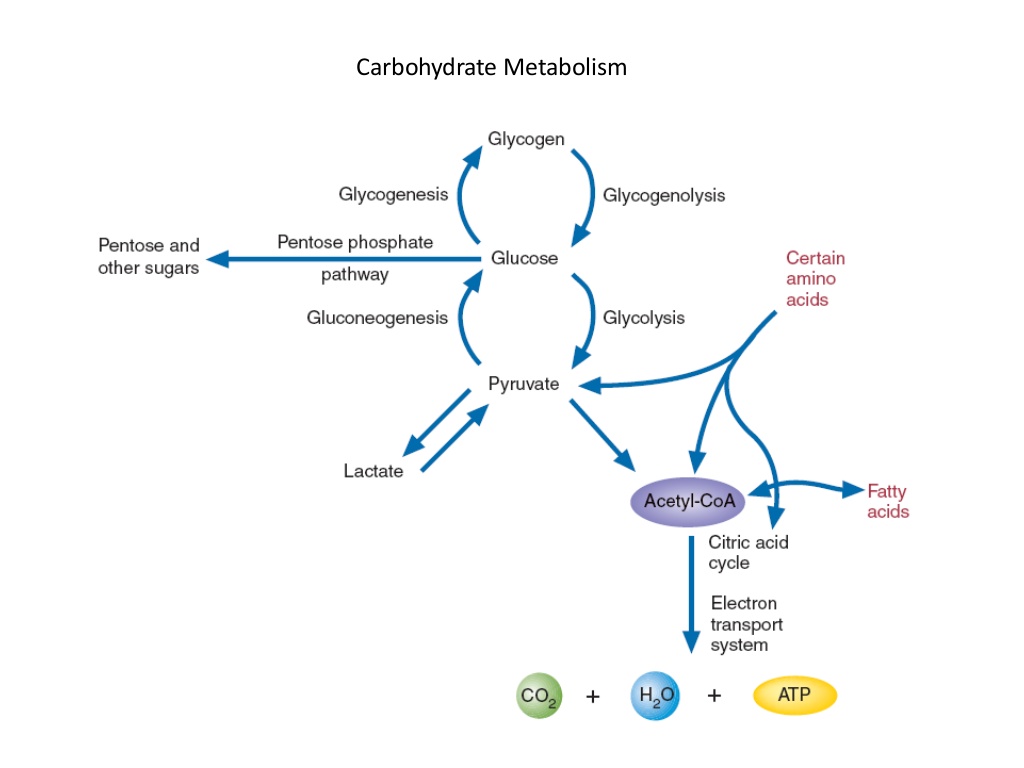 As seen in the figure, the end product of carbohydrate metabolism is energy as ATP. If carbohydrate intake is high and the need is low, the excess energy is stored as reserves in the form of body fat because excess carbohydrates (that cannot be stored in the blood in excess amounts) produce excess acetyl CoA, which is diverted into fatty acid biosynthesis. Fatty acids then end up as triacylglycerides or fat. Thus, people who consume a lot of food that contains sugar and do not exercise, will ultimately gain weight.

On the other hand, fat is a macronutrient coming from animals or plants that is converted into fatty acids and glycerol upon hydrolysis. The glycerol part enters the TCA cycle while the fatty acids undergo β oxidation, and these processes produce a substantial amount of energy. Since fat is insoluble in water, they are stored as droplets in the cytosol. These droplets, when large, are difficult to process by water-soluble enzymes and are therefore more difficult to access than carbohydrates. Excess dietary fat that is not circulating in the blood are stored as triacylglycerides, and can be broken down when the need for energy arises. 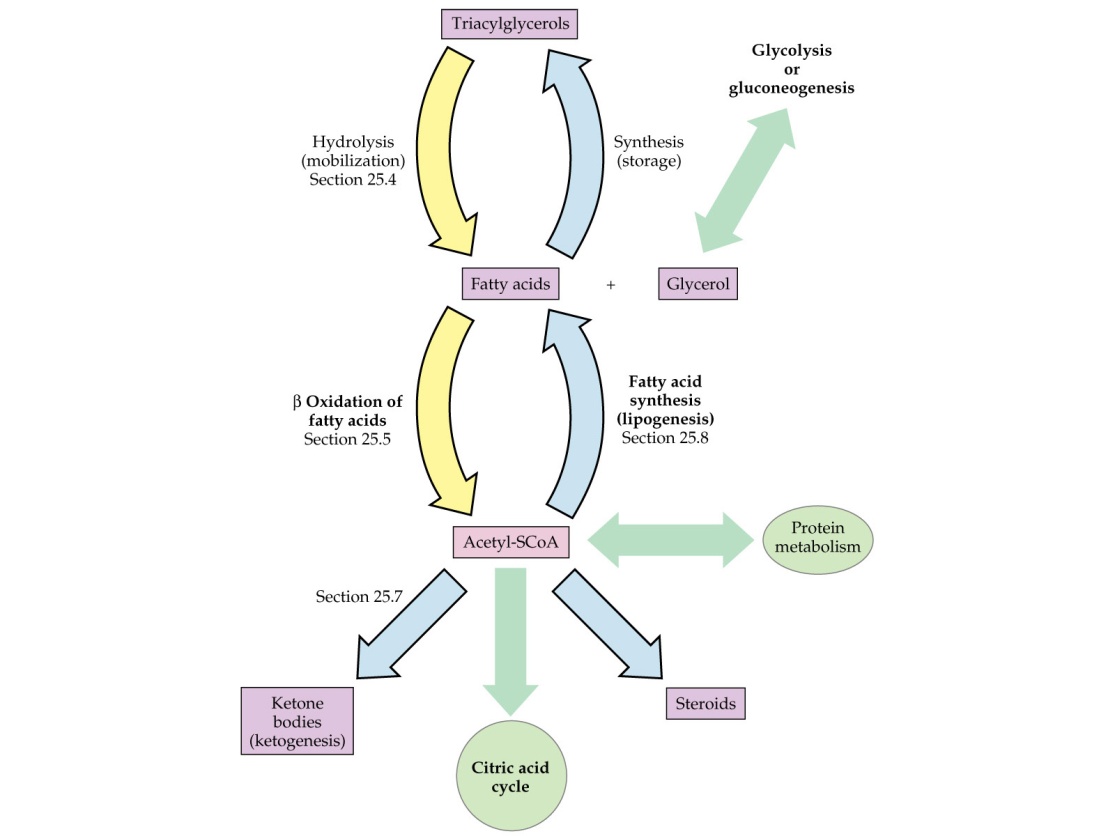 A diet rich in sugar and fat will yield a high energy input. Without energy output through physical activity and exercise, unused energy will be converted into body fat. However, diet with more fat than sugar will have a higher chance of leading to obesity than a diet richer in sugar than fat. This is because a large amount of fat intake will increase the amount of triacylglycerides in the blood and also due to the fact that carbohydrates (sugars) will be the first macronutrients to be utilized for energy.

The Effect Of Sugar And Fat At A Diet Level

To put this entire scientific jumble in simpler terms, carbohydrates will be the first to be used up in energy production and fat will remain in its storage form, making the person more obese as his or her diet continues. Fat also burns in the presence of carbohydrates, meaning a diet with a larger percentage of fat than carbohydrates from sugar will make it difficult for body fat to be lost.

However, certain characteristics of sugar and fat must be taken into account before coming to a final conclusion; fat greatly contributes to the palatability of food in terms of texture, mouthfeel, taste, and aroma. Thus, most foods available in the foodservice industry, especially in fast foods, and food manufacturing industry, are high in fat. Favorites such as burgers, French fries, deep-fried foods, snacks, and many others all contribute to the obesity epidemic. Although, fats are said to have an impact on satiety (influences time delay until next meal), but are poor contributors on satiation, which signals a person to stop eating. Thus, people have a tendency to overeat fat-rich foods, aside from them being palatable.

On the other hand, sugar, an addicting substance, is also a major ingredient in food. According to James DiNicolantonio on his research about the addicting effects of sugar, a high intake of sugar will affects dopamine receptors, which are the reward neurotransmitters. This implies that the more sugar a person eats, the more he becomes addicted because the sugary foods feel like rewards, and when sugar is absent, a person experiences withdrawals and craves to eat more sugar-rich foods.

The bottom line is that a fat-rich diet will lead more to obesity than a sugar-rich diet because of its biochemical characteristics in the body. With that being said, sugar is much more addicting than fat and is therefore often consumed in much higher amounts than fat, which is why sugar is considered by many to be the more “dangerous” of the two when it comes to diet and obesity.

Both sugar and fat can cause a person to overeat. It depends on the person’s preference, economic status, and cravings, when it comes to what kind of foods he will eat, whether it be high in fat or high in sugar, or in most cases, high in both. Ultimately, as long as you can control yourself and only eat each nutrient in moderation, you can maintain a healthy lifestyle and still consume both.

1 thought on “The Scientific Truth About Sugar vs Fat: Solving The Age-Old Feud”