When it comes to developing an impressive physique, there’s no getting around a huge back. Those thick slabs of beef that sweep down from your shoulders (otherwise known as the lats) are the epitome of raw, unencumbered power. It’s why they say that bodybuilding competitions are won from the back.

In order to achieve the sort of thick, wide back musculature that turns heads, most guys rely on the deadlift. However, the rack pull has been getting a lot of love lately, making many people wonder whether it is a viable alternative to the old standby.  Let’s investigate. 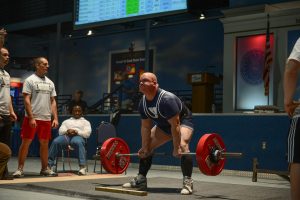 The Rack Pull is a variation of the deadlift.  It involves performing a limited range of the deadlift movement, starting from a position at about the level of the knees. This is achieved by setting the bar up on blocks or by deadlifting in a power rack with the supports set at knee level. An immediate benefit of the rack pull is that it allows you to lift heavier weight as a result of the more limited range of motion.

The rack pull is often used to help overcome a weak point in the deadlift. It means that you can use an overload slightly above or below a sticking point in order to overcome it. As such, it is used as an adjunct to, rather than a replacement for, the deadlift. The rack pull essentially takes the legs out of the movement so that you are not working your glutes or hamstrings as much as you do on the deadlift.

Because you are able to use more weight on the rack pull, it is a great exercise for increasing your grip strength. The limited range of motion and lack of necessity to bend the knees significantly means that you can pull up more weight than you ever could on the deadlift. That is going to tax your forearms and wrists to a greater degree, meaning that your forearm strength and gripping ability will be more significant.

The rack pull, because of the greater load that it allows, will also place more stress on your trapezius and upper back muscles. This makes the rack pull a better way to increase the strength and size of your traps and lats than the deadlift.

The rack pull is also a more accessible exercise for people with lower back issues than the deadlift. It is also a less technical exercise. That means that there is less that can go wrong with the movement.

The rack pull will not place as much emphasis on your lower or mid back as the deadlift. That makes the deadlift a better exercise to work your overall back. If you are doing the rack pull exclusively, make sure that you are also doing complementary exercises that work your mid and lower back muscles.

The deadlift is one of the foundational mass movements of the human body. If you want to get big, you simply need to be putting the time in on this movement. This exercise works every muscle in your body as well as giving you a pretty effective cardio workout. The deadlift also improves your posture, core stability, and core strength. This move teaches you to stand up straight, push your hips forward and pull your shoulders back.

Deadlifts are a great exercise for increasing your raw power. This will translate into increased weight on all of your other lifts. When you deadlift regularly, you will be able to bench, squat, and do pull ups more effectively. In addition, deadlifts done with a lighter weight for reps will allow you to burn off a lot of calories, leading to enhanced fat loss. This will also increase your cardiovascular health.

Because deadlifting is a real life application, it is quite different from most moves that you do in the gym. It is pretty unlikely that you will ever have to push directly up off your chest when lying flat on a bench, as in the bench press. Lifting a dead weight from the floor is far more likely to happen. That makes the deadlift a great exercise to prevent injury. A lot of people have terrible habits when they lift things. The deadlift not only teaches you the correct lifting technique, it strengthens your muscles, joints, and tendons to make any job outside of the gym a piece of cake.

Deadlifting is also great for people with lower back problems. The exercise does a great job of strengthening the erector spinae muscles of the lower back. This takes a great deal of pressure off the spine and is often what is needed for people’s back pain to disappear.

The deadlift is a great way to increase and measure your overall strength. In particular, it will quickly bring up your grip strength. Grip strength is often neglected, yet it is vital for anyone who trains with weights. Greater grip strength will improve your performance on any sort of pulling exercise. Too often, people fail on an exercise, not because the target muscle is fatigued, but because their grip strength gives out.

The deadlift is also a very safe exercise when done correctly. In fact, this could be the safest movement that you do in the entire gym. If you feel uncomfortable while performing the exercise, simply drop the weight. Apart from everything else, the deadlift is a great move to increase your hormone production, specifically testosterone and growth hormone. Increases in those hormones translates to more muscle on your body.

So, which is better?

Well, that depends on what your goal is. If you are after overall mass gains, then the deadlift is going to be the winner every time. Same thing when it comes to building up your strength level as fast as possible. But, when your specific goal is to build up your traps and upper back because they are a weak point of your body, then you are better off with the rack pull. This move will also allow you to lift more weight.

Of course, if you are wanting to overcome a weak point in your deadlift, then you will obviously want to do both of these exercises. But you shouldn’t do them in the same workout. That would be too taxing on your body. Rather, you should perform the deadlift as part of your leg workout. In fact, if you want a killer leg attack, simply perform squats and deadlifts for five or six sets each, pyramiding up to your final two sets at six reps.

Three or four days later, add rack pulls as part of your back workout. Be sure to include such other moves, such as hyperextensions and seated rows, to target the middle and low back, which the rack pull does not give a lot of attention to.

Now that you know that the best way to train for a huge, powerful, well-proportioned back is to use both the deadlift and the rack pull in your workout, you had better learn how to do these moves properly. After all, neither exercise is going to benefit you if you do it incorrectly.

Here are 7 common mistakes that you do not want to do when deadlifting:

The rack pull is a less technical move than the deadlift. But that doesn’t mean that you still can’t muck it up. Follow these technique points to get it right every time.