Many people start lifting to get big arms. Having a nice set of guns is the end-goal for many lifters out there, that’s why you see so many inexperienced lifters cranking out set after set of the same type of curls.

However, when you’re in pursuit of an enviable pair of pythons, exercise selection is important, and not all bicep exercises were created equally. As with the rest of your body parts, there are exercises that will provide different levels of effectiveness and intensity to your biceps.

Before we dive into these exercises and what makes them tick, let’s take a look at the anatomy of the bicep.

The bicep is broken up into 3 parts. The most well-known parts of the bicep are long head and short head.

The long head of the bicep is the strip of muscle that runs along the outside of the upper arm and gives the bicep a peak when flexed.

The other, little known part of the bicep is the brachialis. The brachialis is a small muscle lies underneath the long and short head and affects your bicep peak as well, but not nearly as much as the long head.

Keeping in mind your bicep anatomy will help you have some mind-muscle connection while performing your lifts. For easy reference, check out the image below borrowed from Bodybuilding.com. 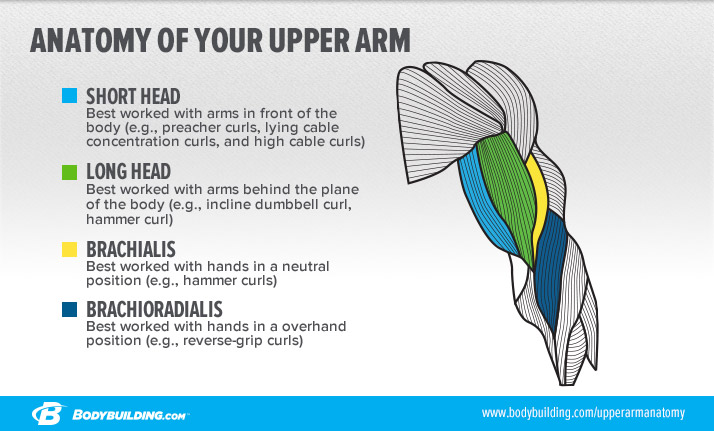 Hammer curls are a bicep exercise performed by holding dumbbells at your sides and curling while remaining that grip and not supinating it. From the bottom of the rep to the top of the rep, your palms are facing in.

However, hammer curls are often discredited because of the amount of momentum and swinging motions people use in the hammer curl movement. The hammer curl, like most other exercises, should be performed with strict form, not using momentum to swing the dumbbells up.

The thing about hammer curls that set them apart from other curl varieties is their impact on the biceps brachialis, the small muscle under the long and short heads that we discussed earlier. The hammer curl is one of the few exercises that really effectively recruits the brachialis, so if you’re nitpicky about your biceps and you’re going for overall evenness and not just mass and peak, this is the exercise for you.

Supinated-grip curls, or standard bicep curls, are generally the first thing most people do with a dumbbell. One of the oldest exercises in the book, this gold standard of bicep training is as versatile as it is effective.

With a supinated grip – that is, with your palms facing up – you can curl with dumbbells, barbells (barbell curl), do cable curls or preacher curls. You can also do reverse curl exercises. But in this example, we’re going to look at dumbbell curls to put the movement on an even playing field as the traditional dumbbell hammer curl.

The supinated-grip dumbbell curl, as with all other curling movements where your elbows are at your sides, is going to mostly recruit the long head of your biceps brachii. The long head, as previously mentioned, is going to give your bicep muscle its peak and width when viewed from the side.

As with the hammer curl, using momentum on this exercise to swing the dumbbells up is a big no-no, as it will hinder any growth or strength gains on the exercise by limiting the recruitment of the bicep muscle.

Before we choose a winner, I want to mention that exercises for every body part should be varied so that every head of each muscle has a chance to be stimulated. Switching up exercises and working your muscles differently is extremely important if you want a balanced physique.

Another aspect of the standard bicep curl that makes it superior is the fact that it simply is not as easy to cheat a rep as with hammer curls and allows for proper form. When most people do hammer curls, you’ll see them dipping the shoulder of the side they’re curling on, this is a cheated rep, and takes the bicep out of the last part of the rep.

Although standard, supinated-grip bicep curls are more effective in working a larger part of the bicep, that doesn’t mean you should cut hammer curls out of your workout completely and only do one type of curls.

Switching up your bicep workout to include short head work (preacher curls, cable curls), long head work (alternating dumbbell curls, concentration curls) and brachialis work (hammer curls, hammer-grip rope curls) is the best way to ensure that you are developing your biceps entirely and evenly, and will help bust through plateaus.

So grab some iron and whether it’s a hammer curl, a standard supinated curl or a preacher curl (or preferably all 3) start pumping out those reps!

11 thoughts on “Hammer Curls vs Bicep Curls: Is One Better Than The Other?”