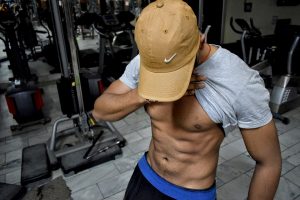 The chest can be divided into two main areas. The sternal area of the pectoral muscle is the large, meaty area that runs from the sternum down to the lower chest and back up to the armpit. Then there are the muscle fibers that run from the clavicle across toward the armpit and effectively make up the upper chest.

In order to perform an exercise that targets either of these areas, you need to follow the direction of the fibers in that movement. Whenever you bring your arm up and across your body you are following the direction of the fibers in your upper chest. The fibers of the bulky part of the chest run directly across the chest from the sternum. So, exercises that move the arm directly across the body will target that area.

The fibers that make up your lower chest run in an arcing direction from the lower sternum out and up toward the armpit. So, the direction of the fibers is up and out. That means that, in order to most effectively work the muscles of the lower chest, we want to follow that direction, but in the opposite direction. In other words, we want to perform exercises that come down and across the body.

The go-to lower chest exercise for most of us is the decline bench press. At first glance, you might think that move involves pressing directly up from the chest as if you were doing the flat bench press. However, when you analyze the angles you will notice that you are actually pressing at about a 30 degree downward angle, which very closely replicates the direction of the lower chest muscle fibers.

The decline bench press is a familiar lower chest move and should form the cornerstone of your lower chest routine. But there are other moves that are just as effective. Let’s take a look at 7 of the best – and then combine them into a super productive lower pec focused chest workout.

Get up into position on a dip bar and hunch your body over slightly so that your shoulders are rounded and you’re looking down at the floor. You don’t want to be too bent over, however, or you will no longer be targeting the lower chest. Now perform a regular dip. As you come up to the lockout position at the top, actively push away by protracting your shoulders and lifting your chest. You’ll feel this in the serratus, which lies directly to the side of your lower chest.

The straight bar dip is an old-fashioned dip alternative that is used by guys who didn’t have access to a dip bar. It just so happens to be an extremely effective lower chest move.

Set up a weighted bar on a power rack at about the level of your sternum. Stand in front of the bar and grab it with an overhand grip at chest level. Now draw yourself up so the you are at arm’s length, with your feet off the ground. You will have to lean forward slightly in order to balance yourself. Have your legs together and angled slightly in front of you.
Perform dips by bending at the elbows to bring your chin down towards the bar. It is ok to let your elbows flare out on this move. You will have to work at it to gain mastery over this exercise, with the goal of being able to control a slow full, descent to really stretch the lower pecs.

Stand in front of a triceps pushdown machine and load the weight to about 25 percent more than you would normally use for 12 reps on the triceps pushdown exercise. Stand a little closer to the machine than you normally would and lean over the bar slightly you will be in a similar starting position than if you were when doing the straight bar dip. Rather than tucking your elbows in at your sides, let them flare out. Push the bar down to full extension. As you come back, consciously open up the chest by bringing the elbows out and up.

By using cables, you are able to almost exactly simulate the movement of the muscle fibers. The standing cable lower chest press does exactly that.

Stand in front of a cable machine that is set to the high pulley. Grab one of the handles and start with your hand up at chest level. Move the correct distance from the machine so that there is tension on the cable in this position. Now punch your arm down and across your body. Start with your elbow high and wide and then bring it across to a low position where it actually contacts the sternum – your hand should be across to your opposite hip.

The kneeling x press takes the single arm press that we’ve just described and adds an extra element. Ideally, you will want to use a cable cross-over machine for this one, but you can also do it at home with a pair of resistance bands.

Set up the high pulleys and kneel in the middle of the cross-over machine with a handle in each hand. Start in a top position with your elbows out and back to really stretch out the pecs. Then punch the handles down and across the midline of your body to really squeeze the pecs. Come all the way through until your arms are crossed over and fully extended into the bottom position.

Set a loaded barbell on a power rack at about the level of your navel. Stand a couple of feet away from the bar and grab hold of it with an overhand grip at shoulder width. Now perform an incline push up by lowering your chest to the bar, making sure that your t-shirt actually touches the bar. On the way back to full extension, twist your body to one side, bringing your head around as much as you can. This will forcefully contract the lower pec on the opposite side of your body. Alternate from side to side with each succeeding rep.

You’ll recall from exercises # 1 and 2 that the dip puts you through a range of motion which is very close to the direction of your lower chest muscle fibers. That’s what makes it such a great exercise for your lower chest, and it also why 3 of our 7 lower chest exercises involve some variation of the dip. This one makes use of the cable cross-over machine and a bench. It is a great dip variation because it allows you to load up the weight beyond what you could if you were doing a bodyweight dip.

Set a bench to a 30-degree decline angle and position it in front of a cable cross-over machine with the pulleys set low. Grab hold of the pulleys and lie on the bench. Start with your hands at shoulder level and your forearms at right angles to your upper arms. You want your elbows to be back as high as possible.
Now punch your hands down towards each other to cross in front of your groin. Try to bring your hands together in the bottom position. You will really feel the fibers stretching and contracting on this move.

You now have eight extremely effectively moves to focus on the inner chest (including the decline bench press). That’s too many to put into one workout because it would lead to over-training which would prevent you from getting the results that you’re after. That’s why we are going to provide you with two workout programs that you can alternate from workout to workout. This will have the dual purpose of keeping you mentally fresh and keeping your body constantly guessing at what type of stress it is going to receive (that’s a good thing if you want to build muscle!).

You should do these lower chest workouts just one per week. The reason that a lot of guys can’t get the results that they want is that they overtrain. Don’t make that mistake – get in, hit it hard, then get out and allow the muscle to recover and grow.

Alternate the workouts from week to week. Wherever it tells you to do as many reps as possible, that is precisely what it means. Keep going until you cannot perform another repetition with proper form.
The rep count on each set indicates the number at which you should almost fail. So, if you are doing 8 reps, the 6th and 7th reps should be very hard, with the last one being the limit for you – you could do a 9th rep. You may have to experiment a little with the weights to get it right.

Your rest between sets should be kept to a minimum in order to keep the stress on the working muscle group – in this case the lower chest. Rest between exercises should be no more than two minutes.

This lower chest specialization workout should be performed for 6 weeks. At the end of it go to an all-round chest program where you perform the flat bench press (with bar or dumbbells), dips, cable cross-overs, flyes and regular push-ups.