The Reverse Pec Dec is an exercise that allows you to target an area of your shoulders that is very difficult to hit – the rear delts. In this article, we provide you with a complete guide to getting the optimal benefit from this great exercise on the pec dec machine. 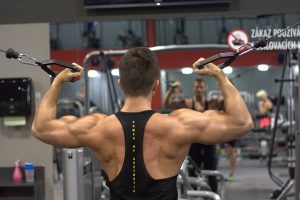 Your shoulders, or deltoids, are made up of three muscles. The front delt attaches to the outer third of the clavicle. It is a triangular shaped muscle that attaches at the other end to the tuberosity of the arm. The muscle fibers of the front delt run in slanted fashion from the clavicle bone down to the biceps. So, in order to effectively work the front delts, you need to do exercises that follow the path of those muscle fibers by bringing the arm up and across. Exercise such as the cable front raise do this effectively.

The side delt originates at the little bump of bone that you can feel in the middle of your shoulder, known as the acromion process. It travels down to the same insertion point at the top of the arm as the front delt. This muscle has a bulbous shape. To work in line with the direction of the fibers of the side delt, you would need to raise the arm out to the side. That is why the side lateral raise is a very effective exercise to hit the side delts.

The rear delt is an oblong shaped muscle that sits at the back of your shoulder. It originates on the outer spine of the scapula. It comes down and around to feed into the insertion point on the upper arm as the other two deltoid heads. The fibers, therefore, run down and across from the traps to the upper arm.

A key function of the rear delt is to assists the rotator cuff to externally rotate.

The best way to work the rear delt is with transverse extension. This is extension of the arm back behind the body in the transverse plane. This movement will allow for maximum shortening of the rear delt muscle. The reverse pec dec is an exercise that does this effectively.

Of the three deltoid muscles, the rear delts are the most neglected. The reason is obvious – the front and side delts are obvious and noticeable; pump out a few sets and your shoulders will get instantly bigger and wider. But the rear delts can’t even be seen. They sit at the back of your body like an unwelcome guest. As a result, they get neglected and guys end up with unbalanced shoulder development. That’s not good!

Why Train the Rear Delts? 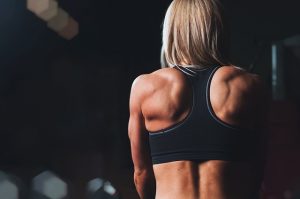 The rear delts, if neglected, will create an imbalance in the strength and development of your shoulders. This is actually a common problem, with many bodybuilders and general weight trainers dedicating way too much workout time to the front and side delts and hardly any to the rear delts.

Well developed rear delts will contribute greatly to the broad shoulder look.  They will also make your delts a lot thicker. Beyond the aesthetic benefits of working your rear delts, you will also benefit in terms of your posture.

If your rear delts are weak, you will have a tendency to slouch, resulting in rounded shoulders and a caved in chest. This is, in fact, a major problem in our society as the result of the massive amount of time that people spend hunched over the smart phone. Working your rear delts, along with your trapezius muscles will allow you to overcome poor posture.

How to Do the Reverse Pec Dec

Push outward on the handles with the side of your palms to bring your arms back as far as you can in a slow controlled movement. At the maximum range of the exercise the arms should be directly outstretched at the side of the body. Now focus on squeezing the rear delts. Return to the start position and repeat.

A benefit of doing the reverse fly on a pec dec machine is that it locks you into a precise movement. That means that you aren’t able to cheat by lowering your arms or using momentum to bring the weight back. 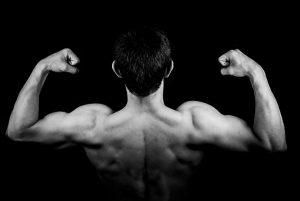 The rear delts are the smallest of the three deltoid muscles. They do not need the heavy weight mass building work that you would give to your front delts. You should do your rear delt work at the end of your shoulder workout. That means that you will have already done your heavy front delt work and your lateral side delt work.

You should select a weight that will allow you to perform the reverse pec dec with perfect form for 10-15 repetitions. As this will probably be the last exercise in your workout you should go all out to create a burn in the rear delts. We suggest the following set and rep scheme . . .

What Not to Do on the Reverse Pec Dec

What if Your Gym Doesn’t Have a Reverse Pec Dec Machine?

A reverse pec dec machine is a quite specialized piece of equipment and you will not find it in some gyms. So, are there any good alternatives to the exercise that can be done with just dumbbells or cables?

This is a variation of the traditional dumbbell reverse fly. Grab a relatively light dumbbell in one hand and lean forward on a rack so that your torso is at about a 45- degree angle, ensuring that your spine is in a neutral position. Let the weight hang at your side.

With the palm facing forward raise the elbow so that it is angled away from the body. As you come up supinate the forearm (twist your hand out). This will have effect of externally rotating the shoulder. Come up as high as you can and then hold and squeeze the top position. You will feel an intense cramp in the rear delt, after a 2-3 second hold slowly return to the start position and repeat.

Be sure to keep your shoulders square when you are doing this exercise. Remember too, that you are not bringing the arm out to the side on this move, but back behind you.

To perform the cable double raise you will need a cable pulley machine with dual handles and low pulleys. Set the pulley to the lowest level, load up a relatively light weight and grab the handles.

Stand facing the machine with your hands in internal rotation (thumbs pointing toward each other). Now, scoop your arms out (putting them into external rotation) and up high and back as far as you can. The movement should create a ‘W’ with your arms. Your elbows should be leading the direction, with the thumbs trying to catch up. So, you should be pushing the elbows and the thumbs back as far as you can.

On the reverse of the movement, scoop back down and in, so that the thumbs are once again pointing towards each other.

To make this exercise even more challenging, extend the arms out slightly in the top contracted position. This will put maximum stress on the rear delts.

If you do not have access to a cable machine you can do this same exercise with dumbbells. To do this move, lie face done on a bench with your feet hooked under the end of the bench. Place a pair of light dumbbells on the floor under the bench and grab then so that your thumbs are toward each other.

With this exercise, an experienced weight trainer should be using about 5 pounds on each dumbbell!

Both the reverse pec dec and the bent over lateral raise are both effective exercises for the rear delts. They both do a good job of targeting the small muscle at the top of your upper back known as the rear delts. But you don’t want to do both of them in your workout, so which is best?

The bent over lateral raise is performed by sitting on the end of a bench with your feet together and your body hunched forward so that your chest is resting on your thighs. With a pair of dumbbells in hand, you open and close your arms to bring your shoulder blades together and, therefore, contract the rear delts.

This is a pretty precise movement with a lot of moving parts. You need to get them all correct to benefit in the target muscle. Your balance and stability are essential on this move. There is also a tendency to bring momentum into the movement by arching back the torso as you bring the weights back. You can also cheat by bending at the elbows to involve the biceps in the movement.

Contrast this to the revere pec dec. So long as you position the seat in the right place, you will be able to achieve the proper alignment of your hands, elbows and shoulders and very single rep. This is a critical advantage over the free weight dumbbell version of the exercise. As a result, all you have to think about when doing the exercise on the Reverse Pec Dec machine is the squeezing of the rear delts at the point of contraction on every rep.

On the other hand, the fact that you are not locked on to a set movement pattern on the bent over lateral raise means that you have to rely on stabilizer muscles in order to achieve the balance and stability that you need. This will build up those auxiliary muscles – a benefit that you do not get with the reverse pec dec machine.

The other benefit of the bent over lateral raise is that it is more practical. When you’re working out in the gym at peak time, and your last exercise is the reverse pec dec, you are likely to be waiting for some time for that machine to free up. Grabbing a pair of dumbbells and a quiet corner to rep out with bent over lateral raises will allow you to get the job done and get out of there so you can get on with your life!

The reverse pec dec fly is an effective rear delt move that allows you to isolate this oft neglected area of your shoulders. There are other just as effective moves, but you need to do them correctly. The bottom line is, whichever rear delt move you choose to do, do it consistently and do it at the end of your workout. The effort that you put in will pay off in the form of fully developed rounded shoulders and hugely improved posture.

For our full shoulder workout, check out our Best Shoulder Workout article.