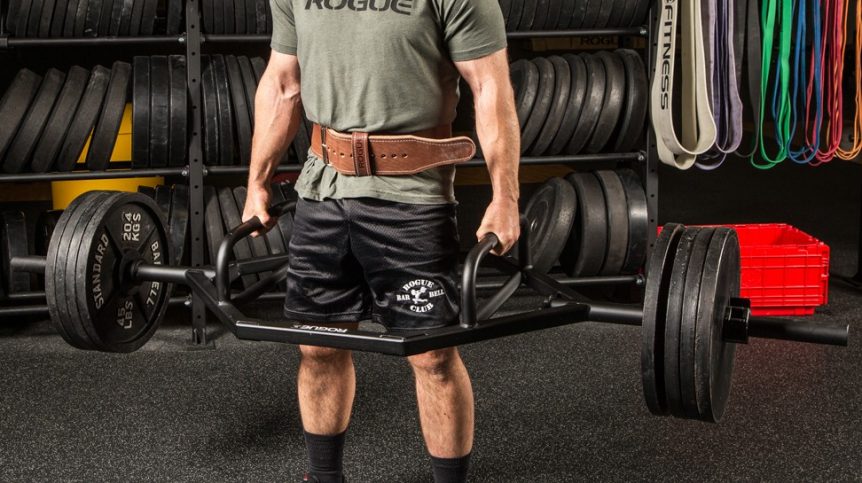 Deadlifts are one of the best exercises you can do. Period. They engage your hamstrings and lower back as primary movers, and everything else in your body as a stabilizer. Unfortunately, poor form under a heavy load on the deadlift can lead to back pain or serious injury – and good form takes some practice to lock in. For every kid in the gym with good deadlift form, there are about 10 with horrible form. Something that can help with deadlift form is to start out with one of the many deadlift variations: dumbbell deadlifts, kettlebell deadlifts; and, the variation we’ll be taking an in-depth look at today, trap bar deadlifts.

If you’ve ever wondered what that weird, hexagonal hunk of chrome in the corner of your gym is – take a closer look, it won’t bite you. Trap bars are a funky invention that basically manipulates the location of the load relational to the axis of rotation of an exercise. They are called the trap bar because they are used mainly to replace barbell shrugs, as the weight is supported by your hands at your sides, and not in front of you, which rotates your shoulders and allow you to hit the trapezius more effectively. Trap bars are also commonly used for the deadlift. But why?

Using A Trap Bar For Deadlifting

We all know that straight bar deadlifts are extremely effective in engaging our muscles and causing gains in strength and size, what’s the deal with the goofy bar? Let’s compare the trap bar deadlift and the barbell deadlift apples to apples and uncover some of the reasoning why using a trap bar may be able to do you some good outside of its namesake purpose.

Weight Placement vs Axis of Rotation

In the straight bar deadlift, the bar starts off above the middle of your foot and is pulled up by the extension of your legs and back. The axis of rotation is at your hips, so the bar starts out pretty far away from your hips, which places a lot of strain on your back – the reason why the straight bar deadlift is an excellent back builder, but also leaves you susceptible to back injury with bad form.

In the trap bar deadlift, the weight is directly at your sides, meaning you’re not nearly as bent over at the start of the movement and the back isn’t as engaged. With the weight being closer to your axis of rotation, most of the burden of moving the weight is put onto your legs. This means that you’ll likely be able to put a bit more weight on the bar with a trap bar deadlift than with a straight bar deadlift.

As we just mentioned when discussing the axis of rotation, the trap bar puts quite a bit less stress on the back, which means a significant decrease in the risk of injury. Another risk factor in the straight bar deadlift is the end point. Think about the deadlift like this: you are pulling a barbell with as much weight as you can handle up as fast as you can up and over your shins, and straight into your pelvis. That sounds risky, right? Weightlifters will know that this is not an exaggeration, as deadlifting in shorts can turn into a set of bleeding shins faster than you can say “sweatpants”. Since you are inside the trap bar and you have clearance on all sides, you don’t have to worry about any run-ins with the bar.

Since you can lift more with the trap bar and don’t quite have to worry about slowing it down so much, there have been studies that have demonstrated its superiority in building power. Olympic movements like the snatch and clean-and-press all rely not only on strength, but also speed. Doing straight bar deadlifts at max speed will very likely end in a trip to the hospital from the stress on your back and the possibility of the bar coming up into your hips or pelvis. Although the initial pull of deadlifts is a critical motion in several of the Olympic lifts, those movements involve a clean in which you get under the bar, so the bar moves straight up, instead of up and back into your body.

The hardest part of the deadlift is learning correct form. If you’ve never done a straight bar deadlift before, starting out with form you’re not 100% on and progressing in weight can lead to pain and injury. To get your body used to the movement, a trap bar could be a good alternative after you’ve graduated from dumbbells. You’ll get used to pulling the bar from a “dead” (not moving) position by your feet and driving you’re hips forward to produce force. There is less risk of injury with a trap bar and you can use it to get your body accustomed to pulling heavier loads.

Deadlifts are an exercise that, health permitting, should be in everyone’s regimen. Whether you’re a beginner and you’re using dumbbells to get used to the movement or someone looking to put some size on your legs and back – the deadlift is your friend. If you’re working around a shoulder injury, have a bad back, want to build more power or simply don’t want scraped up shins because you only work out in shorts, grab a trap bar, load it up, and start knocking reps out. Your body will be all the better for it.