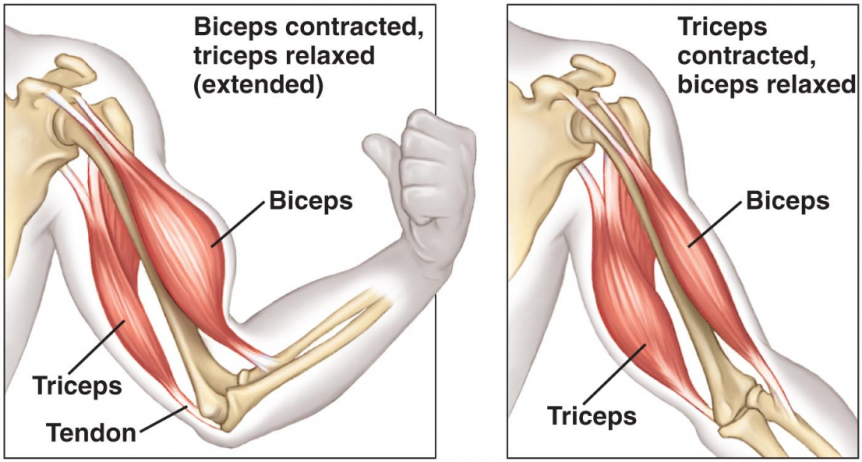 Having a good understanding of antagonistic muscle pairings can also help immensely in preventing injury and correcting muscle imbalances in your body. Muscle imbalances can be minor or severe, and both have an effect on your day-to-day life in varying degrees.

Generally, the simplest explanation of an antagonistic muscle pairing is two muscles that are arranged in such a fashion that when one muscle flexes (shortens), the other extends and vice versa.

How do these pairings affect you? Well, let’s continue with the example of your arms. If you have really strong biceps and really weak triceps, your bicep will exert more of a pull on your arm than your triceps, which can cause inflexibility in the elbow joint.

Imagine for a second gravity pulls down with 5lbs of force; to keep something still, or neutral, you would have to lift it with 5lbs of force. If you’re lifting with 7lbs of force, the object will move. At rest, you want to remain neutral, but having a strong agonist and a weak antagonist can place more force on your joint in one direction.

Why you should Work Out your Agonist and Antagonist Muscles

Training agonist-antagonist muscle pairs was actually a theory popularized by Arnold Schwarzenegger. There are several popular push-pull workouts with decent methodology and they provide a great, simple workout. However, working out opposing muscles with supersets can not only save you time (supersets don’t require as much rest time in between each superset), but they can help you build muscle.

Fatiguing your agonist muscle before working out the antagonist muscle means that your antagonist isn’t fighting the agonist as much due to the decreased pull due to this fatigue. What does this mean? Well, can you squat more reps with 50% of your 1RM vs. 75% of your 1RM? I’m sure you certainly can. There’s less resistance. When there is less resistance from an outside factor, you can put a heavier load directly onto the muscle, which paves the way for greater gains in size and strength.

If you’re unfamiliar with supersets, they are simply 2 exercises performed back-to-back with no rest in between. With these supersets, you’ll want to try to match the plane of motion of the first exercise with the second exercise, i.e. vertical or horizontal, or wherever in between. To see how they’re more effective than regular sets, you can read this study on the matter.

Here are some great examples of supersets you can do with your agonist-antagonist muscle pairs:

When you squeeze your shoulder blades, what happens? Your chest stretches out wide. Similarly, when you flex your chest, your back lengthens. Your chest also happens to be on the front of your torso, while the back is – well, you know. These are two of your largest muscle groups, and supersetting with agonist/antagonist muscle sets can save time, just make sure you’re getting enough rest between supersets. Here are some great supersets for your chest and back:

While the anatomy of the legs lends itself well to agonist-antagonist training, in theory, there simply aren’t a lot of good isolation exercises for the legs – compound exercises are far more effective. The only real option for an agonist/antagonist superset would be performing leg extensions followed by leg curls.

However, leg extensions place a shearing force on the knee and can stress the ACL, so if you have bad knees, stay away from this one and stick to squats, lunges and deadlifts.

Arms, like the chest and back, are where agonist-antagonist training can really shine. Supersetting bicep and tricep exercises can provide a great pump, and even the ability to crank out some extra reps due to both of the opposing muscles being fatigued. Since the biceps and triceps are smaller muscle groups, you won’t need to rest very long in between sets – 60 seconds should do the trick unless you’re really gassed. Here are some examples of great bicep/tricep supersets:

Beginning mostly with Arnold Schwarzenegger, performing supersets with opposing muscles (agonist and antagonist) has been a popular way to train. This type of training isn’t only valuable due to the amount of time it can save you in the gym, it can be a very effective way to get more out of your sets.

In addition to all of the listed benefits like better workouts and saving time, supersetting antagonistic muscles with their counterparts will promote symmetry. Not only will having huge biceps and tiny triceps affect your major compound lifts and likely give you elbow issues, but it also looks weird.

This can also be noted distinctly with chest and back, except when your chest or back is stronger than its antagonistic counterpart, it can cause several postural issues that can lead to permanent back problems or potential injury.

With all of the benefits and the only slight drawback of increased fatigue (a problem which can be circumnavigated by slightly extended rest periods), this method of training is too good to at least give a chance. So grab your dumbbells or barbells, maintain strict form and crank out those supersets!